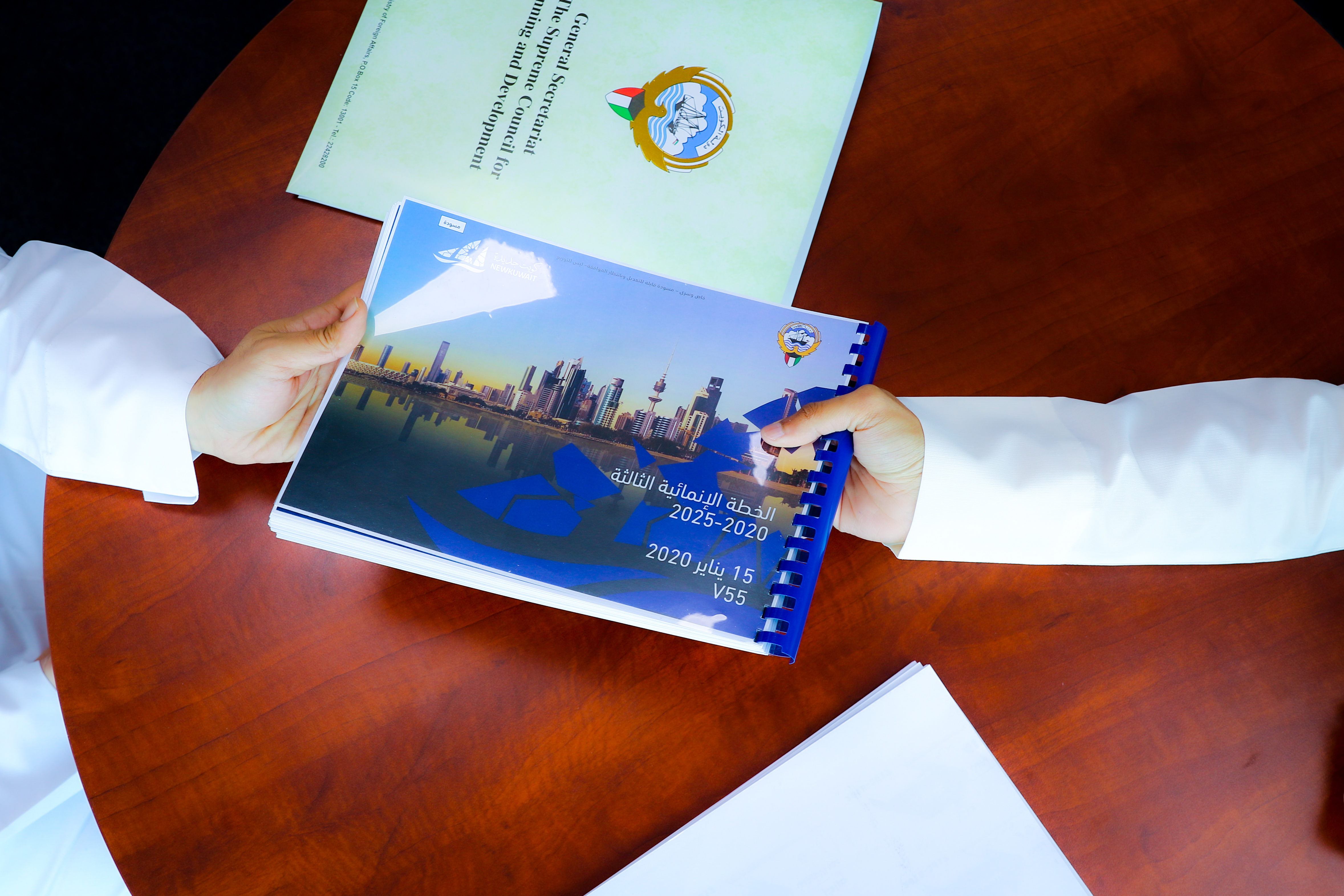 Within the seven pillars focused on within the Kuwait National Development Plan (KNDP), the Sustainable Diversified Economy pillar holds a strategic position as it is the one that forms the foundation of all future development outcomes in Kuwait. A robust, competitive, and diversified economy is the bedrock of the Kuwait Vision 2035.

To that end, the Kuwait Public Policy Centre (KPPC) worked closely to identify gaps and challenges in the policies of the KNDP 2015-2020. Based on a thorough research of existing economic policies, the KPPC developed a policy paper focusing on gaps and challenges titled: “Kuwait National Development Plan and Economic Policies”.

With the initial policy analysis phase concluded and based on the challenges identified in the above-mentioned policy paper, a research agenda was derived to establish the research roadmap that KPPC would take to embark on the policy research: “A Research Agenda for the Economy of Kuwait”. That agenda focuses on specific priority research areas that the KPPC would undertake such as: developing a macroeconomic model for Kuwait’s economy for policy analysis (see macro model page), economic growth and productivity, innovation and the economy of Kuwait, and economic diversification, among other strategic policy areas.

With the objective of informing the development of the upcoming KNDP 2020-2025 and based on the challenges and gaps identified in the policy paper, a white paper titled “A White Paper on Private Sector and Economic Growth – On the Road to Sustainable Economic Prosperity” was developed with a focus on diversification, given that the private sector in Kuwait is vital to the future growth of the economy. In order to address policy gaps, the paper recommends policy options such as (but not limited to) : improvement of foreign direct investment (FDI) policies, establishing a comprehensive technology and innovation policy to ensure maximum benefit of the private sector, developing a trade policy ensuring benefit of the private sector from global trade, and a clear policy for comprehensive spending reviews, amongst others.

Based on the thorough analysis and economic outlook reports, a white paper was developed titled “Accelerating Kuwait’s Economic Growth and Diversification by Supporting the Development and Transformation of the Financial Sector”. This white paper focused on the gaps and challenged currently facing the financial sector and recommended policy options to enhance the sector’s contribution to the national economy. The policy recommendations included (but not limited to): improvement to the competitive landscape, drafting a national mortgage law, creating a government bond program, and attracting FDI by curbing bureaucracy and red tape across ministries and departments. This paper can be found in our Publication page.

In addition to the papers produced by the KPPC for the economic pillar, the Center has also engaged in multiple projects with partners to further enhance our understanding of the factors pertaining to the various issues facing Kuwait's economy and how to best tackle them.

The KPPC sought to capitalize on the existing relationship between KFAS and the Organization for Economic Cooperation and Development (OECD) to aid in reviewing the existing national policy for innovation. Within the Kuwait National Development Plan, science, technology, and innovation (STI) is categorized within the Sustainable Economic Growth pillar, thus taking a prominent position in the vision for Kuwait’s future. STI is vitally important as it is the bedrock Kuwait can be built upon to develop a sustainable economy away from traditional facets of oil reliance.
The collaborative project between the OECD and KPPC lied within conducting a systematic review of the national innovation system in Kuwait and presenting policy recommendations on how to improve that system to foster STI growth. This project enabled the KPPC to have an evidence-based, holistic overview of the existing system and how that system can be reformed to improve its feasibility for years to come. The findings from that report were incorporated within the 2020–2025 mid-range development plan underneath the Sustainable Economic Growth pillar.
The project has successfully met and achieved its proposed objectives.
These objectives being:

The KPPC has partnered with the Oxford Institute for Energy Studies (OIES), alongside its main partner KFAS, to develop and instate a Computable General Equilibrium (CGE) model that takes into account Kuwait’s local political economy and utilizing that model to capacity build in and transmit knowledge to policymakers and stakeholders to further aid them into formulating sound, comprehensive policies.
The CGE model, developed with the support of the OIES, is a computational model that can be used to input data concerning an economy with the output being information that can aid in a thorough understanding of the effect of a policy in certain fields. The utilization of the CGE, within a wider policy making context, will prove an invaluable tool to aid policymakers into making informed, sustainable decisions that will insure viable results in the long term.
The scope of work of the partnership project with KPPC, KFAS and OIES focused on the creation and development of a CGE macroeconomic model tailored specifically to the needs of the Kuwaiti economy, with an accompanying study detailing its usage. Alongside the main objective of developing the CGE, several objectives were also outlined within the wider area of the partnership that were achieved.
These objectives included: